If you’ve been reading this blog for some time you know I love Peru. However, the government of Alan Garcia and its implementation of the Free Trade Agreement (FTA/TLC) between Peru and the US has put Peru on the brink of becoming a Police State:

All this because of years of neglect (NY Times) of the indigenous people in Peru combined with Free Trade policies that have zoned 72% of the Peruvian Amazon for development and exploration (Duke University). 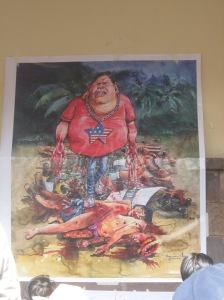 At the Corpus Christi celebrations in Cusco this week we saw this poster as one of many expressions of solidarity with the people of the Amazon. Unfortunately US and European media and governments have been largely quiet on the troubling developments in Peru. I’m convinced if the same kind of things took place in Ecuador, Venezuela or Bolivia – countries with left wing governments – there would be widespread media coverage and political condemnation.

People with different points of view may blame political opposition or foreign influence, but even if only 10% of the independent and eyewitness reports are true, the events at Bagua are still enough to demand Alan Garcia’s resignation.

It’s time to put ideologies aside and demand that Alan Garcia and his entire government resign!