Peruvians are famous for their rather peculiar sense of timing. Peruvians are habitually late, they call it “la hora Peruana” or “the Peruvian hour”. Even for business meetings everyone is typically at least 20 minutes late.

That isn’t news in itself, I’ve written about this before. However, the other day I jinxed myself, I know better by now…

Since mamacita now works in the afternoons, I’ll try to cook dinner most days right around the time when she arrives home, around 8:30 or sometimes later. Now meals in any Latin culture are typically much later than in Western Europe or the US. We normally eat lunch between 2:30 and 3:30 in the afternoon, dinner is sometimes as late as 9:00 pm.

As I said, the other day I jinxed myself. I was cooking my famous lemon-pepper baked chicken with tortellini and alfredo sauce… Mira, que rico 😉 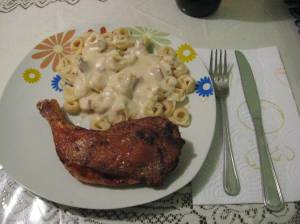 Just as I was getting the water for the tortellini to a boil, mamacita called to say she’d be a little late. I’m not the best cook and I usually wing it a bit when I’m cooking, but one thing I’m picky about is the time to cook the noodles. So as I was talking on the phone I just happened to have the box of noodles in my hand and looked at the “recommended cooking time” and said to mamacita:

Just as soon as I hung up the phone it hit me. Because the “recommended cooking time” said 15 minutes I told Patricia 15 minutes.

You never tell a Peruvian 15 minutes

You can be assured 15 minutes will be at least 45 minutes on a real clock, and probably closer to an hour. If you want a Peruvian to do something in 15 minutes, you better use words like “hurry up”, “right now” or “2 minutes”. That’s not to be fussy or anything, that’s simply the Peruvian sense of timing.

So I turned down all the food as best as I could, but after about half an hour the little goose and I ate our dinner anyway, since it was after 9:00 already. About 45 minutes to an hour after the original 15-minute call, mommy did make it home and gobbled away the remaining noodles and chicken, which was sort of lukewarm but still yummie 😉