One reason I wrote this post yesterday was to set the stage for my “fat bitch ate all the donuts” story. Specifically the point about Cusquenian kids (or young people) having a more favorable opinion of American style fast-food places than people in the US or Europe. In the past few years a McDonalds, KFC and Starbucks have opened at the Plaza de Armas in Cuzco and young Cusquenians tend to like them and regard them highly, both as places to eat and as places to work.

Fair enough, I understand their sentiment. It’s something new, something worldly, not something they’ve grown up with on every street corner. And because the employees there are proud of their jobs, the service is actually quite good.

About 30% of all Peruvians live in the Lima metro area. One of the disadvantages about living in the “provinces” is that there are a number of things you just can’t do anywhere in Peru other than Lima. Embassies, corporate offices, international flights, etc. Often you have no choice but to go to Lima for things of that nature. This week I had to have a document notarized at the US Embassy, so I hopped on a flight to Lima and back. Counting airfare, hotels, taxi, embassy fees, etc, I spent around $400 to have a piece of paper notarized 😦 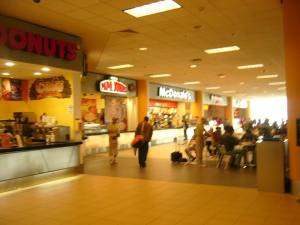 I’m terrible at buying souvenirs but I like to bring home at least something from every trip I go on. Mamacita linda likes it when I bring home a box of Dunkin Donuts. She munches on a few, takes some for her friends at work and gives the rest to her family. Tourists sometimes look at me quizzically when they see a tall gringo get on a flight to Cuzco carrying a box of donuts but I don’t care. Anything for my mamacita linda 🙂

On this trip mamacita linda asked me specifically to bring back a box of Dunkin Donuts. I managed to go through security, on my plane, fly to Cuzco, take a taxi home all without opening the box and stealing a donut for myself. I was a good papi! I arrived home just before lunchtime, happy as can be. Mamacita linda came home shortly thereafter and was happy to see her fresh yummie Dunkin Donuts that papi brought from the big city! Mami grabbed a yummie donut and munched it right down.

Like a big dummy I asked: “Are you sure you want to eat another one of those before eating lunch?”.

Mamacita offered me a bite of her donut and went on to her mom’s house. I walked 2 blocks the opposite way to pick up our Brianna Nayaraq from her “jardin”.

Fat bitch ate all the donuts

“Papi, Manchita threw the garbage on the floor.”

I usually put the garbage out of reach of the dogs when I leave the house. They are normally not bad but at the same time they’re not well-behaved either. I never had the time (or skill) to train the dogs properly when they were young. On this fateful day I had left Roxi – the older, smarter, Jack Russell looking mutt – outside in the yard and Manchita – the fat dumb Blue Pitbull – had stayed inside.

I ran into the kitchen and to my horror I found on the floor an empty Dunkin Donuts box and plastic bag. Manchita, my fat bitch, tried to look innocent like “A bunch of intruders broke into the house, I tried to fight them off but they were to many” but a speck of white powdered sugar on her nose gave her away. The fat bitch had reached up on the table, tugged at the plastic bag and once it fell on the floor she helped herself to every last donut in the box!!!

I was mad as ever. I had toted a box of Donuts for 300 miles only to have mamacita eat 2 and the dog eat 10. To put that in perspective, my fat dog weighs around 50 lbs (~25 kg). At my body weight I would have to eat 40+ donuts to equal her! In a pound-for-pound eating contest not even Sonya the Black Widow could beat my fat bitch!

Chart of the day: 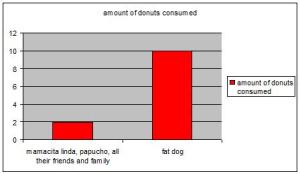 Chart of the day: amount of donuts consumed by my fat dog vs everyone else.

I found this supposedly official record of donut eating. Keep in mind my fat bitch stopped eating because she was out of donuts, not because she didn’t want any more 🙂