The other night I went out with a couple of fellow expats in Cuzco. Lori is a software/marketing executive turned English teacher and Mark runs “Machu Pizza” here in Cuzco. Lori has spent most of the past 10 years or so here in Cuzco, having moved here from California. Mark has been in Cuzco for about 3 years. Mark’s Peruvian girlfriend was also with us.

Living in Peru has given me a new point of view about minorities. I am a minority now for the first time in my life. No matter how much I like Peru and how friendly Peruvian people are to foreigners, there is some level of comfort in being with people who are like you, and like most expats I know, I get together or spend time regularly with other expats. There’s another perspective to this as well: Mark, Lori and myself are very different by the traditional “classifications” that we try to apply in the US. Lori is an African-American woman, I’m a middle-age white guy. In the US we’d be lumped in entirely different “categories”, but here in Peru we’re the same category (GRINGO). While we may have different ethnicity, our backgrounds and life experiences are similar. Diversity is more than checking off a box on an HR form.

At any rate, the four of us devoured one of Mark’s pizzas and shared a bottle of cheap Peruvian wine. Bad for the waist but good for the soul. Here’s some of the things we talked about:

We fussed about how Peruvian pizza isn’t that great. Mark is planning to overhaul the entire pizza scene here in Cuzco with his “Machu Pizza” restaurant and little pizzas sold from “Machu Pizza” carts outside schools and markets. Here in Peru this sort of “informal economy” is very common, there are street vendors selling candy, snacks, drinks on practically every street corner. Mark is planning to become the mogul of street corner pizza vendors 🙂

As a kid I remember going to my grandmother’s house one day while she was preparing food to cook. My grandmother was using a little knife to cut some food and she complained that her knife “was a Spaniard”. I didn’t get it at first (I was only 5 or 6 at the time) and she had to explain to me what she meant was that the knife was doing work of inferior quality – it was not sharp at all.

I sort of took offense to my grandmother’s comment at the time because I loved Spain, it’s where we went on family vacations. But my grandmother had a point: in the late 70s (not that long after the Franco era in Spain) when northern Europeans like us would go on summer holiday in Spain we found that quality of workmanship was not nearly as good as in the more industrialized countries in northern Europe. You can love a place while still being realistic about strengths and weaknesses in an economic or practical sense (*).

During our conversation Mark told us he bought a welding machine and is building his own mobile pizza ovens for his streetvendor carts. He tried to have one oven built by a local mechanic or contractor, but never got it done. One part of the job was done well and on time but then the job never got finished. After much delay and promises of “tomorrow” Mark eventually retrieved his partly-built oven and finished it himself. I fussed about the 2-year old park in my neighborhood that’s already falling apart, Lori complained about some of the sub-standard workmanship on her house that she is building. These are very typical gripes of expats. I love Peru but it’s not a place to go for high-quality workmanship and reliability in an industrial sense.

Mark mentioned something about a web site he’s had in the works for 6 months now, still not ready. Most Peruvian websites are terrible quality. I think it has to do with the education at the universities and higher-education institutes. The quality of education in IT seems really bad and not practical.

Why Peruvian kids love to work at McDonalds

Mark told us he’s having trouble getting reliable help for his restaurant, not uncommon in his business I’m sure. Several of the young people who had worked for him have gone on to work at fast-food restaurants here in Cuzco. We have 1 each of McDonalds, Bembos, KFC and Starbucks in Cuzco and many kids look at them as cool or great places to work. We amazed how fast-food jobs – at least with the big multi nationals – are regarded highly here in Cuzco, unlike back home.

So it would be a fair question to ask, after all that fussing, why don’t we just go back to our own countries?

Truth is, we discussed that. Despite our typical belly-aching we agreed that we like living in Peru better than in our home countries. There’s a certain quality of life that has nothing to do with mundane considerations like taste of pizza or quality of websites. Here in Peru there is more social interaction than back home, life revolves a bit less around work and money, people don’t take themselves as seriously as in the industrialized countries. And of course as expats every day is a bit of an adventure, maybe that’s not for everybody, but I like broadening my horizons by living in a different culture.

And finally, other than pizza, Peruvian food really is better than the rest 😉 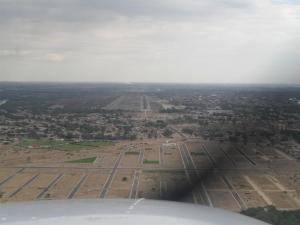 I delivered a small Cessna 172 from the factory in Kansas to Lima last month. Here I am on final approach for landing in Piura.

(*) If the EU people had been more realistic about the strengths and weaknesses of the various economies throughout the Euro-zone they might not be in the predicament they are now.

8 thoughts on “What expats in Cuzco talk about”