I’m a bad picture-taker and lately I haven’t had much time to share via social media – so happy I got rid of my Facebook 🙂 – but occasionally I upload a few pictures to my Flickr page. I’m sometimes surprised by which pictures are rated as most popular or most interesting after some time on the site. The following are some of my most popular Peru pictures on Flickr:

Many of my most popular Peru pictures are pictures of Peruvian food. Here’s a picture of typical Andean food, I believe this was at a wedding party:

This picture was from our trip to Ancon, a beach resort just north of Lima. I can see why this picture would be popular, I mean, just look how good-looking he is 🙂

Of all my popular Peruvian food pictures, this is actually the only one of food that I cooked myself: papi’s world famous salchipapas! Salchipapas are a popular snack in Peru, french fries, fried slices of hot-dog and all the sauces you crave. I like mine just with ketchup.

Here’s a picture of Peru’s national dish: ceviche. We took this on our trip to Huanchaco. I was very sad to learn last week that our friend and host in Trujillo unexpectedly passed away last week. QEPD Sr. Alejandro.

Another picture of the shrine at Señor de Huanca, my beautiful wife and baby at the side of the main Señor de Huanca church building. In the buildings behind them true believers enter to light candles and ask for the blessing of Señor de Huanca.

More Peruvian food pictures. This soup was cooked by Patricia’s 80-something grandmother, on her fogon, traditional cooking over an open wood-fired flame.

What would all that good food be without a good drink? I don’t have any pictures of Peru’s national drink, Pisco Sour, but here is a picture of another drink more popular in the North of Peru, algarrobina.

Another way you will see the blend of Andean and Christian culture is at Christmas, take a look at this typical Andean baby Jesus figure, it looks nothing like the traditional Roman Catholic image of Jesus:

Finally, we haven’t really done much touristy stuff in quite some time but here is a picture of Patricia and some of her friends visiting Choquequirao. It takes 3-4 days hicking (there and back) to visit Choquequirao. Really, you shouldn’t let the picture fool you because even though they all look like tough adventurers here, the truth is all of them are very much city slickers 😉

As I said, I’m not a good picture-taker by any stretch of the imagination. If you are looking for really good Peru pictures, check out Cusquenian’s Flickr page.

Finally, I also upload some of my flying / ferry pilot pictures if you’re into that kind of thing.

I had a chance to visit the town of Pisco a few times recently. Pisco is about a 4-5 hour busride south of Lima, and best known as the namesake of the famous Pisco Sour drink (more on that later).

I’m not a great photographer, but here are some random pictures of my visit to Pisco (click on the pictures to enlarge): 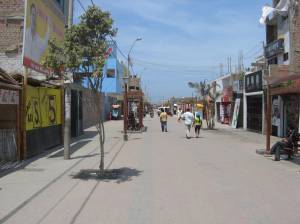 A street leading to the main square in Pisco, Peru 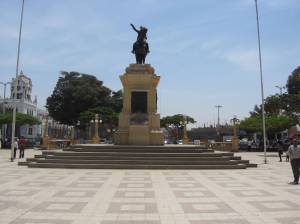 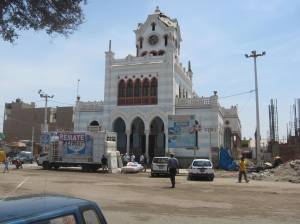 The church on the main square in the town of Pisco, Peru

You can see some construction going on next to the church. The town of Pisco was hit by a serious earthquake in 2007. It was hard for me to tell exactly what’s ongoing reconstruction from the earthquake versus some of the typical half-finished buildings you see in Peru, but there is still obvious earthquake damage in the area.

I think most of the economy in Pisco consists of growing grapes for the “Pisco” drink and fishing. Pisco also has a shared civilian/military airport, a relatively large seaport and some oil and gas installations. You can see the oceangoing ships in the background. 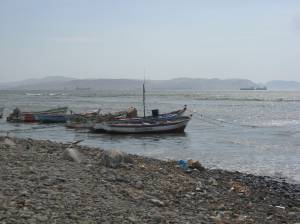 I stayed in the small village of San Andres, on the Pacific coast about 5 minutes from Pisco. San Andres is a very quiet seaside town, but a few tourists do come through there to get to the Pisco airport for scenic flights over the famous Nazca lines. 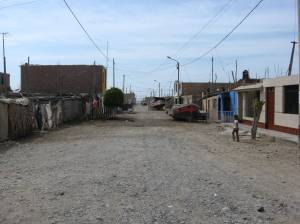 The seaside village of San Andres, near Pisco, Peru 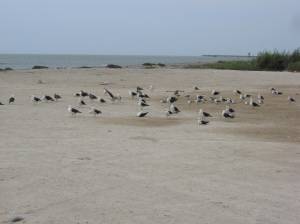 Birds on the beach in San Andres 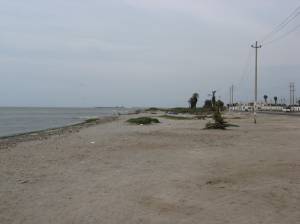 The beach in San Andres, near Pisco, Peru

Near Pisco you also find the Paracas National Reserve and the Ballestas islands, where I was told you can find really beautiful beaches and a resort-style hotel, but I didn’t have time to go there.

In San Andres I stayed at the hostal “La Jalapa”, which is a very quiet and pretty hostal just at the edge of the town. It has nicely kept green areas, a pool and restaurant. I paid the silly rate of S/.30 per night and was very happy. 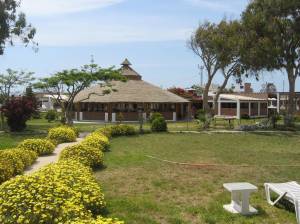