I suppose I owe a follow up to my cryptic post of yesterday. Although I’d been meaning to write about the deterioration of the Peruvian currency (PEN – Peruvian Soles) for some time, the world headline news of the ousting of President Martin Vizcarra saw me throwing up a cryptic one-liner predicting swift demise of the PEN.

First things first: we are all fine and daily life has been mostly normal this morning. But to be abundantly clear: there was a coup d’état in Peru yesterday whereby a bunch of thugs in congress effectively voted themselves into the executive branch.

All the talking heads are talking but any time you take power of your country outside of the established constitutional order, it’s a coup d’état.

In other words, congress was the judge, jury, executioner and most importantly, the direct beneficiary of impeaching Peru’s legitimate President Martin Vizcarra. The thugs in congress trumped up some charges against the President and in a few hours of open and shut debate, voted to throw out Vizcarra and take the keys to the executive office. There is no defensible argument that it was a legitimate impeachment, the Peruvian congress voted out Peru’s president because they could and because they would be the immediate and immense beneficiaries.

The details really aren’t important. What matters here is that the constitutional order in Peru is flimsy at best, and deteriorating. Peru today is not really a constitutional democracy, its system of governance is a ruling class comprised of oligarchs and thugs under the guise of a democracy.

Just because people trot out to vote every X years does not mean the country is a constitutional democracy. Unfortunately many ordinary Peruvians simply don’t have the level of education or understanding to make the distinction between a true democracy and marking a ballot every so many years.

As for the Peruvian Sol (PEN) there are many underlying issues, from populist policies across the board (printing money) to demographics (young population) to the impact of the coronavirus pandemic but all of those things are relatively not as important as the underlying constitutional order. 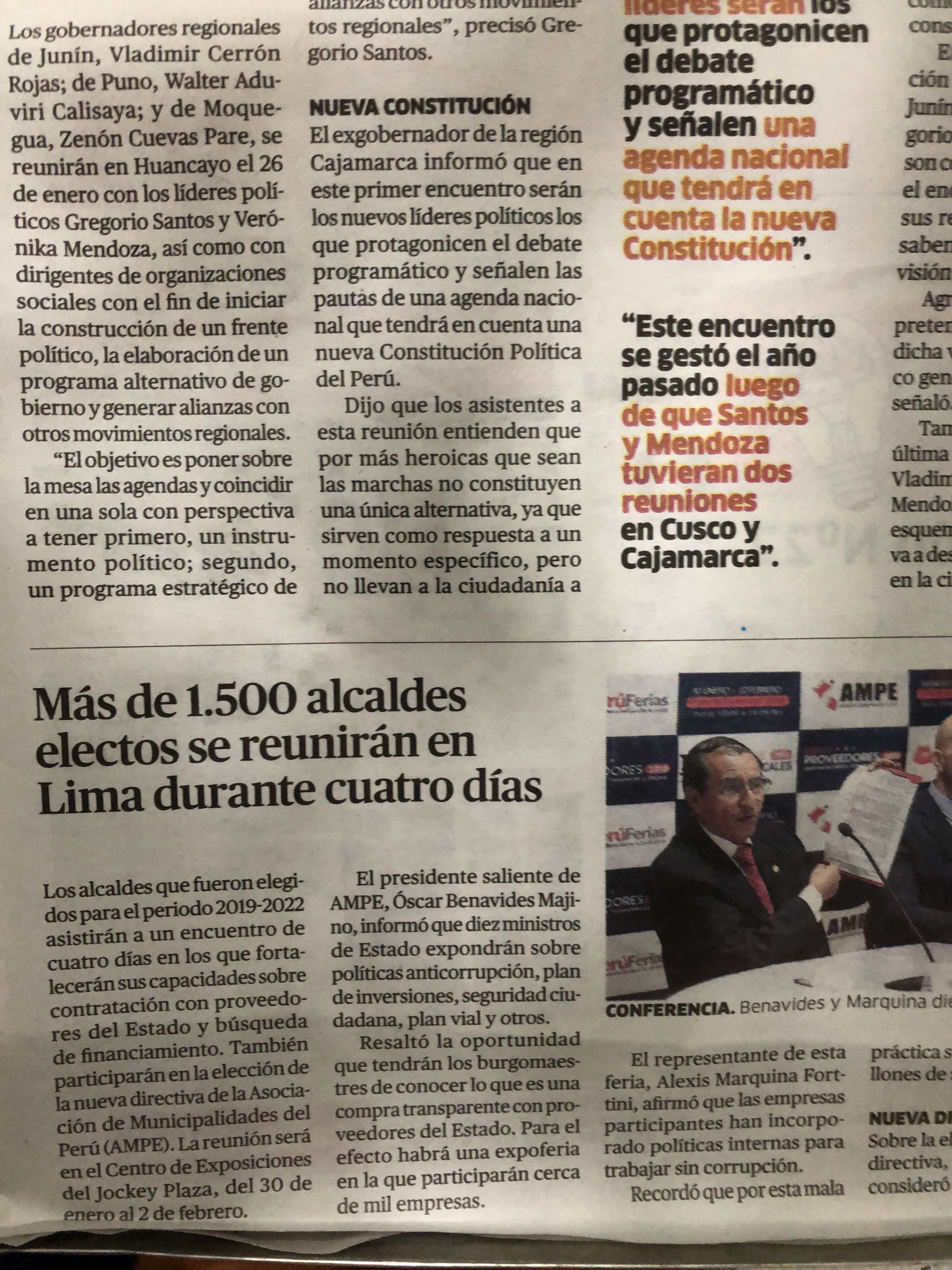 The newspaper is at least a couple of weeks old. I only buy the paper to put on the floor of the bird cages so our budgerigars will rightly and justifiably be pooping on a headline that reads “More than 1,500 mayors will meet in Lima during 4 days”. If you care to read the blurb below the headline, it was essentially a meeting for the incoming politicos elected in last fall’s local elections on how to be a good mayor, hosted by the powers that be in Lima.

Now you could argue that only Lima has the facilities to host such an event and that most of the incoming politicos are badly lacking in qualifications for the job they are about to take on but I would counter that sometimes setting the tone is more important than the details and in this case, the message should be loud and clear that the powers that be in Lima need to get out and work for all of Peru, not the other way around.