We spent a few days in Arequipa last month, you may have already read about part of the adventure here.

Arequipa is the largest city in the south of Peru, known as “la Cuidad Blanca” or the “white city”. It is well known that Arequipa is called “la Cuidad Blanca” because many of the city’s colonial buildings are made out of “sillar”, a white volcanic rock local to the Arequipa area. However, I’ve heard there’s a second reason for the nickname “white city”: when the Spanish settlers arrived in Lima, many found Lima’s climate too cool and humid and moved to Arequipa for its mild and dry climate. As the Spanish settlers with more white-colored skin displaced the native Quechua Indian population, Arequipa became known as “the white city”.

I don’t know if that second story is true but you can’t blame the Spaniards for moving to Arequipa in search for a better climate than Lima. Stuart once said that Arequipa has the most perfect climate on earth and it’s hard to argue with that. Outside of a few rainy months during the Southern hemisphere summer, Arequipa enjoys a mild, dry and sunny climate – all day, every day.

The weather isn’t hot but do bring a hat because the sun is very strong in Arequipa, I guess that must be due to the combination of elevation and dry air. Arequipa, by the way, is at an elevation of 7,550 feet or 2,300 meters, higher than Denver but lower than Cuzco.

There are many reasons to visit Arequipa: it’s far more cosmopolitan and far less touristy than Cuzco. The local food is a bit different (more spicy) than in other parts of Peru. Arequipa has beautiful views, history, culture and a near-perfect climate.

But the most important reason to visit Arequipa is that the city is near to several major volcanos, practically in the shadows of “el Misti Volcano”. One day sooner or later one or all of the volcanos will go KABOOM and then Arequipa as we know it will be history. So go on and get your chupe de camarones and rocoto relleno before it’s too late 🙂

Feeding pigeons at the main square in Arequipa, Peru

A room inside the Founders Mansion, Arequipa

By the Founders Mansion, Arequipa

Misti Volcano, seen from the mirador at Carmen Alto

Misti Volcano in the background

I’ve been really short on time lately and haven’t been posting much. I meant to write about my last visit to the EsSalud hospital for Brianna’s routine immunizations. The nurses at the hospital wanted Brianna to see a psychatrist and a specialist for being “hyperactive”.

In my opinion that’s nothing but bad influence from the so-called developed world. According to the CDC 2.7 million kids in the US are taking medication for ADHD – but I don’t want any part of it. ADHD is baloney. I agree that Brianna is more active than other kids her age, she’s nothing short of a little hellraiser. But having lots of energy is not a medical condition that needs to be treated or corrected, hyperactive kids just need a way to apply or let out their energy in an acceptable manner, and if it takes a lot of effort from the parents to channel or control that energy, so be it, that’s life.

We spent a few days in Arequipa last week – more on the trip and beautiful city of Arequipa later. Unlike Cuzco, Arequipa has some new North-American style shopping malls. Since we don’t get the opportunity too often (Cuzco has no movie theatres) we went to see a movie at the Cinemark theatre in the mall Aventura Plaza in Arequipa.

We decided to see “the Smurfs” movie, or Los Pitufos in Spanish.

After watching the movie, my new nickname for Brianna is Pitufiloquita, loosely translated Hellraiser Smurf.

It all started of innocently enough. Pitufiloquita ran around the entrance hall of the Cinemark theatre while mamacita stood in line to buy the tickets, sodas and popcorn. She ran in and out, up and down the escalator, looked cute and innocent thereby giving all the teenage couples waiting to get into the theatre an entirely wrong impression of what a 2-year old really is like.

We got into the theatre just before the movie started. We didn’t even make it through an entire movie preview before half of Pitufiloquita’s popcorn ended up on the floor. Mamacita had wisely bought a separate small popcorn for Pitufiloquita and a large popcorn for us to share.

By this time Pitufiloquita was thirsty, so out comes the soda. I made darn sure no soda got spilled in the theatre, that’s just not cool. It’s one thing to sweep up some popcorn, cleaning sticky soda is a different matter. Pitufiloquita knows how to drink from a cup by tipping the cup, she also knows how to use a straw. Sometimes she gets confused and tips the cup all the way up and that’s how most of the soda ended up on her shirt.

What remained in the big bucket of popcorn for mamacita and papucho then somehow ended up on the floor as well. At that point there was nothing left to throw on the floor so Pitufiloquita started to explore the theatre, climbing up and down the stairs. Papucho made the mistake of going after her, which she just interpreted as “hey, time to play the chase-me-around-the-theatre game”.

Papucho retreated to his seat, pretended not to know anyone and started looking for the nearest exit.

Funny how kids that age learn all the things you don’t want them to. At one point when I was trying to stop her from making a mess Pitufiloquita got all mad and right at a perfectly quiet moment in the movie she yelled out:

She starts out in an angry voice, but then it becomes a whiny baby voice. It’s so funny you just can’t help laughing, even though you know you shouldn’t.

Now all this is not to say Pitufiloquita wasn’t enjoying the movie as well. For all her antics she actually did pay attention. At one point there’s a scene with a cellphone, and Pitufiloquita of course had to comment:

Probably the worst moment for me was when the man sitting next to us got up to go buy some snacks. He was with his wife and kids. One of their kids was about Pitufiloquita’s age, but she sat quietly on her mommy’s lap during the entire movie.

When the man got up and started to walk past our seats, I expected him to shake his head, make a condescending remark, or perhaps just pretend to ignore us. Instead, he paused, his eyes opened wide:

Probably only guys will really understand this. His reaction was like when you watch an MTV “Jackass” episode: you’re looking at something disgusting and you know you should be disgusted or offended, but the scope of the mess is so immense that you just can’t help but be impressed.

This man was a father of a young family himself yet he was impressed by the mess made by our 2-year old.

I didn’t know whether to laugh or cry.

When the lights came on I ran for the nearest exit 😉

As for the movie, I thought it was pretty good except that I wish they had chosen a setting other than New York city. I understand the commercial aspect of it, but personally I would prefer if more movies were set in different places.

No matter where you are, people are people. We were trying to enjoy our first post-baby vacation and try to make it through a movie without embarrasing ourselves just like young families do anywhere in the world.

Hellraiser smurf at the mall in Arequipa 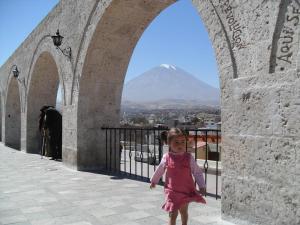 A promotional video from the developers of mall Aventura Plaza in Arequipa:

The “Pitufos” movie trailer in Spanish, so you too can have the Smurf’s song in your head for the next 4 days 🙂