Round 1 of the 2011 Peruvian presidential elections is over. The June runoff will be between Keiko Fujimori and Ollanta Humala (some background about the candidates here).

Most of our friends don’t care much for either candidate. Among other things, Ollanta Humala wants to re-write Peru’s constitution, likely giving more power to the poor and less to business and foreign investment.

I thought I’d have a little fun on my Facebook page and see just how much bad stuff about Ollanta the typical jeans-wearing, iPhone toting, middle-class Peruvian (ie. most of our friends) would believe. 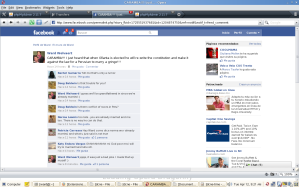 The people who commented on my silly joke are all good friends and good people (and not all are Peruvian), but it does show how easy it is to plant irrational fear (Glenn Beck anyone?) about anyone whose ideology may not correspond with your own.

The first round election result is fairly interesting, because both Keiko and Ollanta have their followers but there’s also a significant part of Peru’s population (mostly middle class and business establishment) who don’t like either. The fear is that Keiko will bring back more corruption and Humala may upset business and foreign investment to some extent. Peru’s presidential election runoff is almost akin to, say, a choice between Ivanka Trump (daughter of a famous person) and Michael Moore.

My personal input to the Peruvian presidential elections is only this:

1) As a visitor/guest here I don’t care who becomes Peru’s next president. However the Peruvian people choose to govern their country is up to them and I’m privileged to be here as a guest.

2) No matter who wins the runoff, I don’t think there will be a significant change in daily life in Peru. Even though both candidates are seen as potentially having some issues, I think Peru’s society is strong with very close families, reasonable institutions, a fair economy, etc. Politics here can be interesting and colorful, but in my view politics are not that big of a factor in society.